What Does The Color Of Your Dogs Gums Mean?

Happy Wednesday everyone!  Are you coming down from your sugar high after this Valentine’s Day weekend?  Speaking of sugar, Jake and Maggie got some fun treats to eat this Valentine’s Day and it got me thinking of the ingredients and the extra sugar they might have consumed so I put together a post on how to check your dog’s gums for any discoloration, dehydration, or toxicity happening within their bodies.

What is Capillary Refill Time?  The normal time it takes for the capillaries to refill in the dog and cat is 1.5 seconds. A prolonged capillary refill time (CRT) occurs when the blood is not flowing adequately. This can occur if the pet is in, or is going into, shock.

• Gently lift your dog’s upper lip to expose the gum area above his canine teeth (AKA the long pointy ones). Note the color.
• For dogs with pigmented gums, look in between … for the pink areas.
• Now, take your finger and gently press onto the gum for a couple of seconds. The pressure will displace blood from the area, turning it whitish in appearance.
• When you remove your finger you should see the blood rush back in within 1 to 2 seconds.

You’ve just checked your dog’s Capillary Refill Time (CRT). This is the same test your human doctor performs when he briefly presses on your fingernail and then lets it go. Capillary refill measures the amount of time it takes for the displaced blood to flow back into the capillaries (AKA the tiny network of blood vessels in the gums). It’s the quickest and simplest way to evaluate blood flow and dehydration.

These are so cute!  Made with whole wheat flour, organic beets, rice, non-fat dry milk, lard, egg, water, and ascorbic acid.  Yogurt coating and food coloring for the icing.  Jake and Maggie loved these adorable treats for Valentine’s Day and their new toys from my dog-loving friends who came over for Galentine’s dinner! 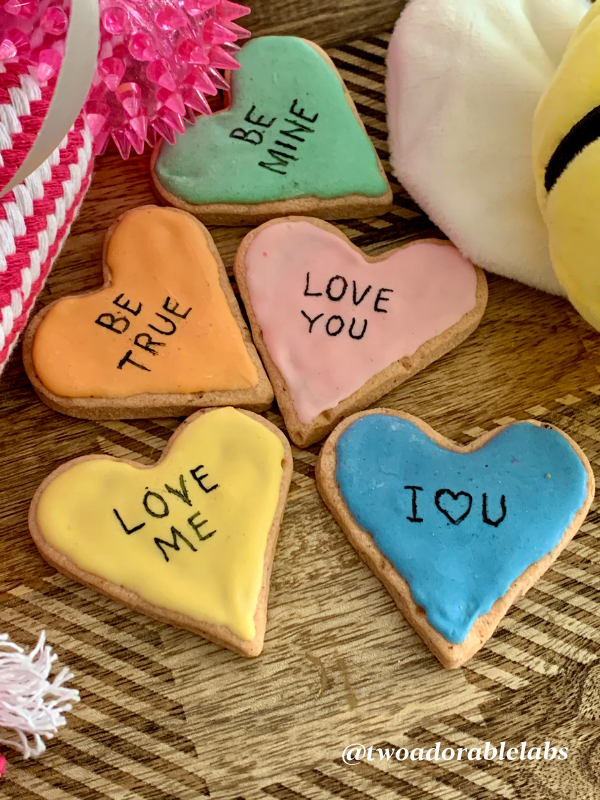 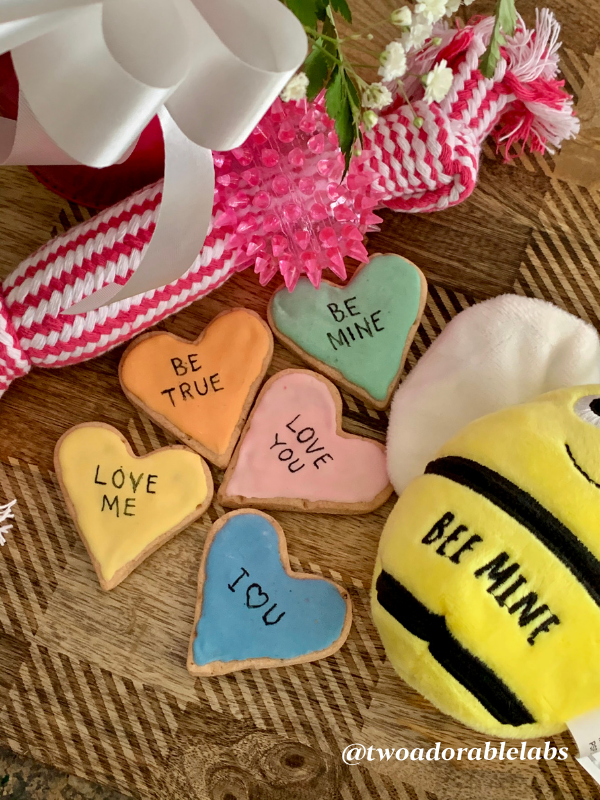 For dogs with black gums, as an alternate, check the color of the tongue or gently pull down the lower eyelid and take note of this color. You will not be able to do a Capillary Refill Test. NEVER press down on a dog’s eyes or eyelid. Simply, take note of the color. 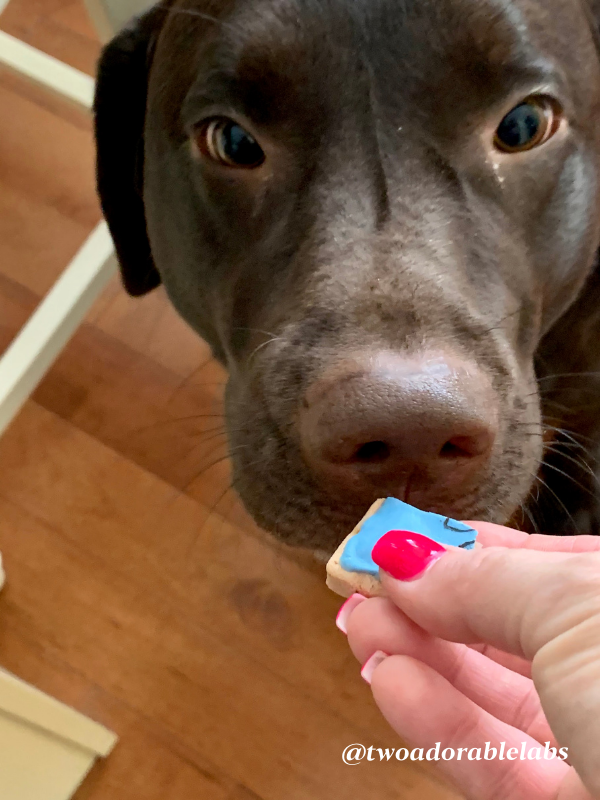 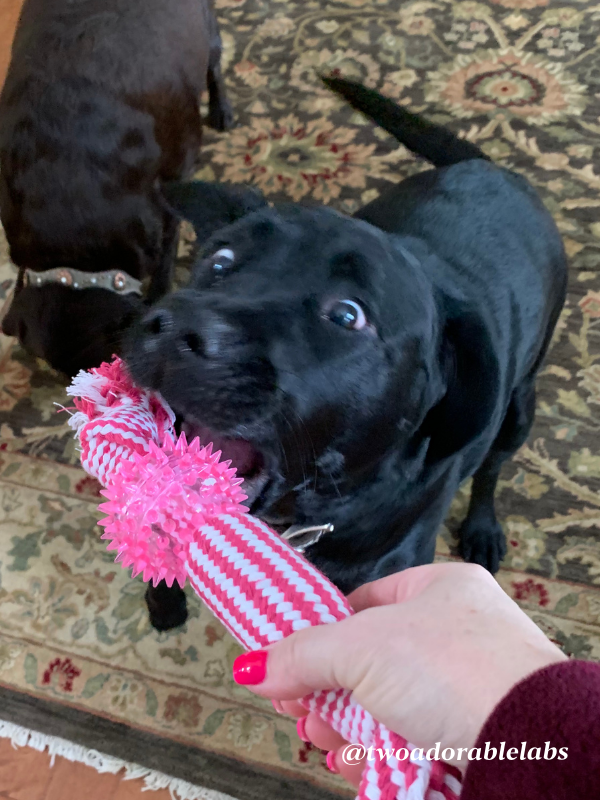 Blue Gums: If inadequate amounts of oxygen are being circulated through your dog’s blood supply, its gums may turn blue or purple.  This gum color is referred to medically as cyanosis. Cyanosis can be caused by a variety of issues. Pneumonia, congestive heart failure, pulmonary thromboembolism, and other respiratory problems can cause this blue gum coloration if the condition is severe, because of a decrease in oxygenated blood. These conditions are all very serious.

Pale Pink or White Gums: If a lack of blood or hemoglobin is present in a dog, then the gums may be pale pink or even white. This is most often a sign of anemia or acute blood loss.  Many underlying diseases can cause anemia, and trauma can result in severe, acute blood loss. Because the body doesn’t have enough blood to circulate, the normal pink color fades. Conditions that cause anemia are very serious.

Bright Red Gums: If your dog’s gums are very red or bright pink then it may mean it is overheated, or has stomatitis or gingivitis. Dogs with heat stroke often present with bright red gums as they are panting in an attempt to cool their body temperature.  Bright red gums are also a sign that there is inflammation in the gums or they are infected. Both of these periodontal problems can make the gums bleed more easily and can be painful.

Yellow Gums:  Yellow gums result from the pigment that’s formed during the breakdown of Red Blood Cells. Inside the RBC is a protein called hemoglobin. When hemoglobin breaks down, the pigment bilirubin forms. High concentrations of bilirubin is what causes the yellowing appearance (AKA jaundice). If your dog has yellow gums, you’ll probably also notice the whites of his eyes are yellow, as well as other areas of skin on his body. A dog with jaundice must be seen by the veterinarian immediately.

Growths on Gums: Oral tumors are commonly found on the gums of dogs. Sometimes these growths are benign or go away on their own, and other times they are cancerous or contagious. Pappilomatosis is a viral disease that is easily spread from dog to dog and results in pink, fleshy warts on the gums, along with other areas on the body.  These are typically not as concerning as other types of growths or tumors. Other tumors can be cancerous and cause serious health concerns in a dog in addition to causing problems eating and pain.

Bleeding Gums: Stomatitis, gingivitis and growths can often cause a dog’s gums to be very sensitive and prone to bleeding.  If your dog has bleeding gums, he should be checked out by a veterinarian to assess the underlying cause.

I love hearing from all of you and do my best to respond to each and every one of you.  I always enjoy your comments, feedback, and suggestions so keep them coming!  If I’ve posted a recipe (for our human and our furry friends) and you try it, don’t forget to tag me on Instagram @twoadorablelabs and use #twoadorablelabs​Instagram. 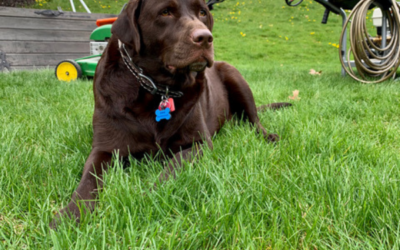 Happy Wednesday everyone!!!  Happy Cinco de Mayo!  So I totally missed preparing a Cinco de Mayo meal to post today but will do that on Friday.  Instead we are talking about Silidog Pet Tags and how awesome they are!  Made from 100% silicone, are customizable, and... 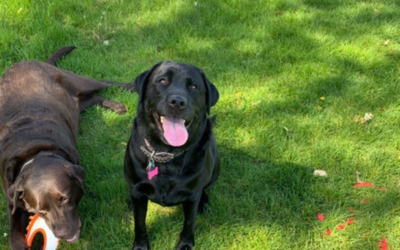 Do Dogs And Cats Have A Natural Ability To Respond To Crystals?

Happy Monday everyone!  Do dogs and cats have a natural ability to respond to crystals?  A trend that’s becoming increasingly popular among pet parents who want to go the alternative route is the use of healing crystals.  I have never tried using crystals on myself or...