Happy Monday everyone!  The one thing that I love the most about this summer is looking out over our patio, porch, and property and seeing all of our hard work coming to life and blooming in colors.  I spent days putting our patio planters together with several trips to Bedners Greenhouse in McDonald, PA.  What a wonderful place!  And now…I’m dealing with an infestation of Japanese beetles!!!  They are on the rise this year and let me tell you, it is real!  I am seeing clusters of beetles on my poor rose bushes and I’ve noticed that they have now ventured over to my potted plants and hanging baskets.  I called our local greenhouse and did some research on the web and was told to use Neem Oil.  I bought one bottle at Lowe’s and one bottle on Amazon and have gone through both already. I’ll be making another trip this week.  I’ve provided information and links below on homemade treatments as well.  Although Neem Oil will not hurt the dogs, I keep them inside while using this product as it requires you to drench the leaves and flowers with a spray bottle.  I do not want to risk getting oil into their eyes, nose, and mouth or them possibly tracking it into the house on their paws.  I just want to be safe. 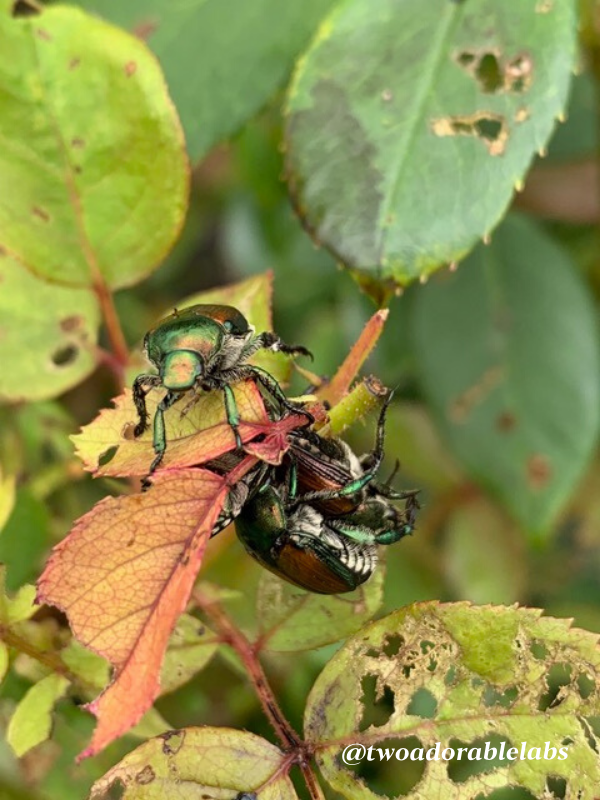 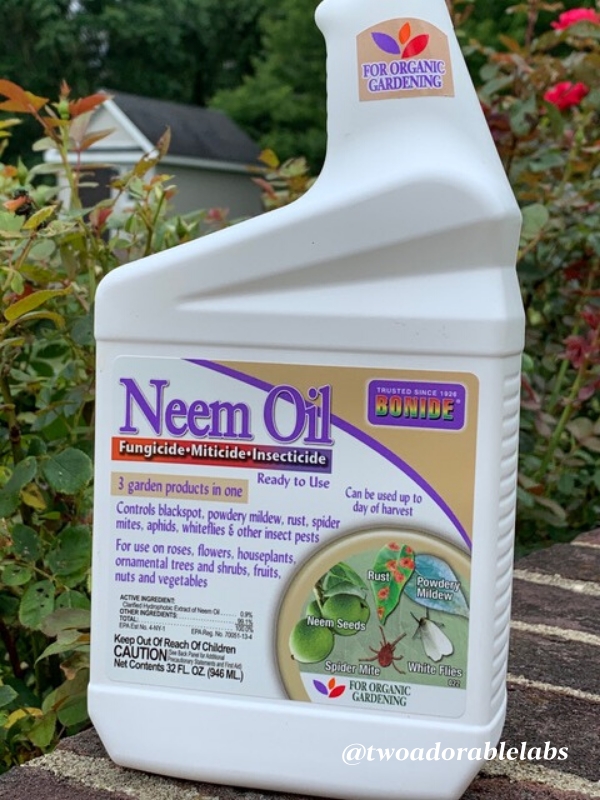 What are Japanese Beetles?
Japanese beetles (Popillia japonica) were first found in the United States in 1916, after being accidentally introduced into New Jersey. Until that time, this insect was restricted to Japan where it is not a major pest. This pest is considered to be an invasive species. It is now found throughout the eastern U.S., except for Florida, and continues to move westward.
Adult Japanese beetles feed on the leaves, flowers and fruits of many different plants. Preferred plants include rose, grape, linden, apple, crabapple, cherry, plum and related trees, birch, elm, raspberry, currant, basil, Virginia creeper, hollyhock, marigold, corn silks and soybean.
Adult Japanse Beetles 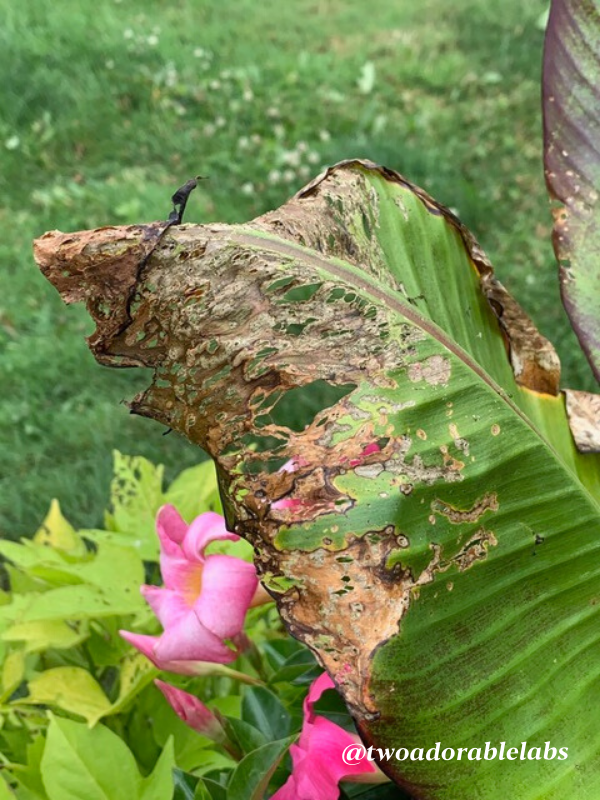 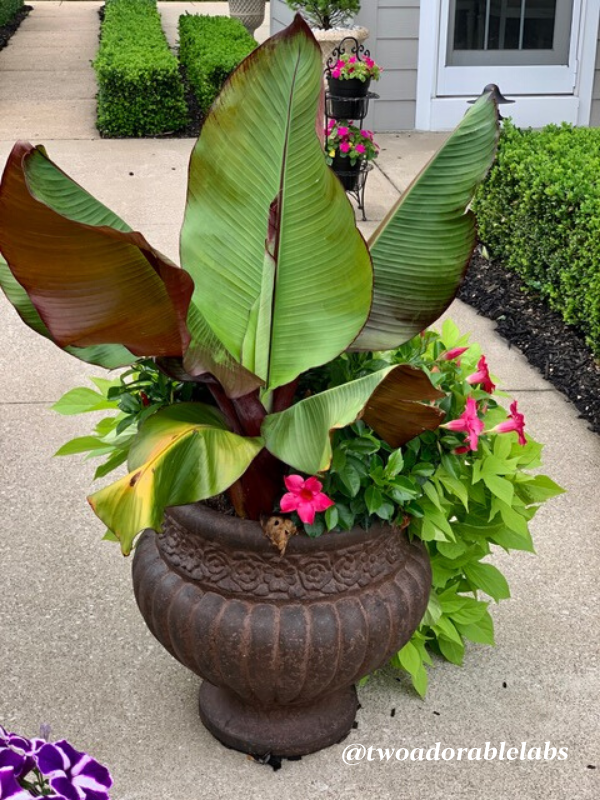 What is Neem Oil?
Neem oil is a naturally occurring pesticide found in seeds from the Neem tree. It is yellow to brown, has a bitter taste, and a garlic/sulfur smell. It has been used for hundreds of years to control pests and diseases. Components of neem oil can be found in many products today. These include toothpaste, cosmetics, soaps, and pet shampoos. Neem oil is a mixture of components. Azadirachtin is the most active component for repelling and killing pests and can be extracted from neem oil. The portion left over is called clarified hydrophobic Neem oil.
I followed the instructions on the back of the bottle but it is highly recommended that you drench the plant in Neem Oil using several applications over a period of time.  The oil should be dripping from the leaves and it is best to use Neem Oil in the morning when the beetles are most active or in the evening when the sun is not so hot.  You do not want the oil to hit the leaves and the sun hit the oil and burn your plant.
Japanese beetles are slow moving which is a plus because you can literally pick them off the leaves or knock them into a bucket of Dawn dish soap and hot water to kill them.  I checked into buying beetle traps and my first thought was…wouldn’t that bring more.  It turns out that most of the articles I read say the same thing…the traps do not deter the beetles from flying in but only bring more.  If you do buy a trap, make sure it is placed far away from the plants you are trying to save. 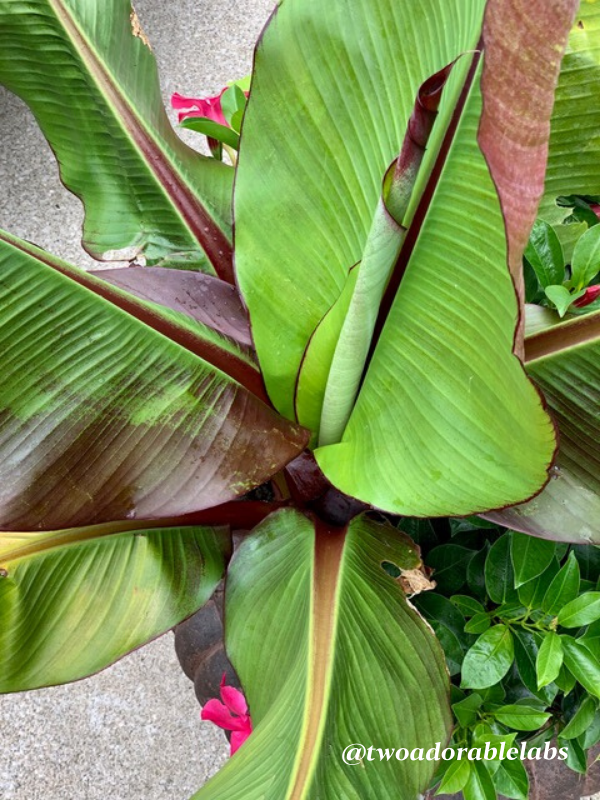 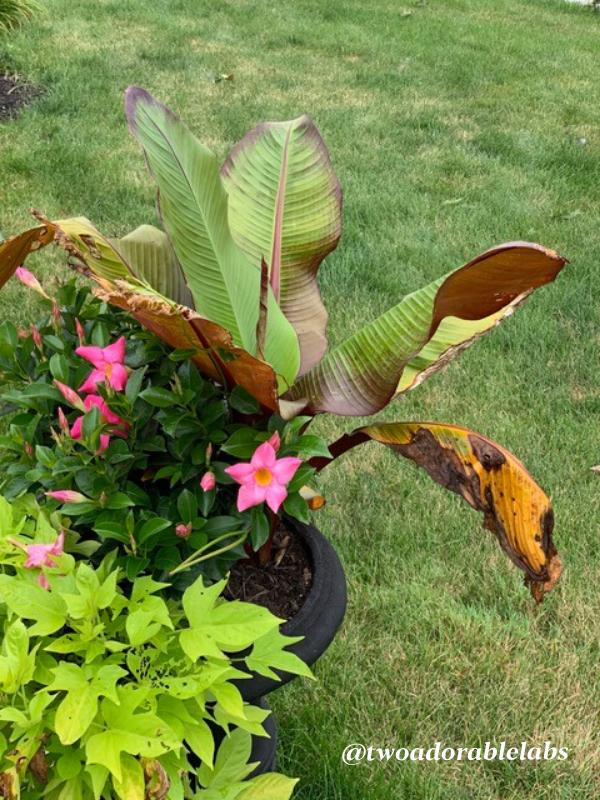 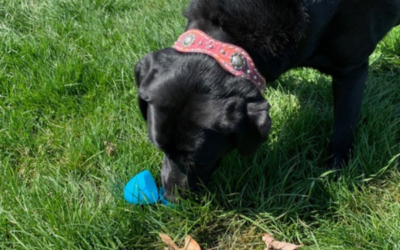 How To Organize An Egg Hunt For Your Pup

Happy Monday everyone!!!!  I hope you all had a wonderful Easter.  We had a gorgeous Easter weekend where Jake and Maggie enjoyed another Easter egg hunt, played Frisbee in the yard and tried a new doggie treat.  I read in Southern Living magazine that 2020 was the... 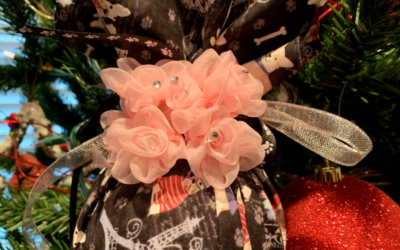 DIY Ornament For Any Pet Lover

Happy Friday everyone!  Do you have extra material laying around from another project that you have no idea what to do with?  Then you’ve come to the right place!  This DIY Ornament for the pet lovers in your life is perfect for any occasion especially at Christmas.... 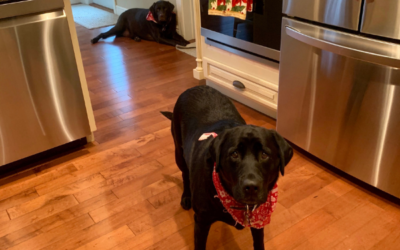 Happy Wednesday everyone!  I’ve been thinking of what to get the dogs for Christmas this year and it’s been decided!  Jake and Maggie are getting new doggie beds!  Of course they will be getting new toys and treats and this got me thinking about all you pet lovers out...